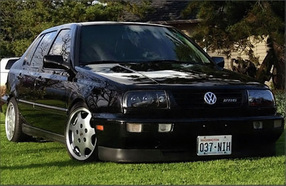 1997 VW Jetta VR6
It all started with my first car, a 1980 Mk1 VW Jetta. For some reason, it was my pride and joy when I turned 16 years old. I had that car for several years until maintenance costs were just too much for a high school studen. So I upgraded and got a '97 Mk3 VW Jetta VR6 GLX. I put a lot of work into that car which you can see on my other site MyVR6.org. The VR6 was simply an awesome car for me. I was very active on the VWVortex and anytime there was something to try on a MK3 VW I was always there to try it. If I had a little more money I was likely going to either install a supercharger or turbo. The only thing that held me back other then money was time and reliability. I loved the look of that car because it was clearly not stock but at the same time it was not over-done. Not to mention the sound of the VR6 with a ported intake and a Magnaflow exhaust is just heavenly. Every person that had a chance to ride in my car loved the sound.

As 2007 was ending, I was going to be running into a problem that I didn't want to deal with...sadly. The timing chains on the VR6 were getting noisy and were going to need to be replaced... The problem is that it is not a easy job therefore it was going to be expensive. Since they normally need to be changed around 80,000 mile and I have been able to go almost 135,000 miles still on stock chains. My wife and I started to look around very "un-seriously" at other cars around October of 2007. She wanted a red mini and I wanted a B5 S4 or a B6 A4. We came across a Blue B5 2001 Audi S4 and took it for a drive.. I was quickly hooked. So a few hours later the Jetta VR6 was traded in and the S4 was ours. It was funny seeing many of my friends faces as I rolled up in a new car. Many could not believe I traded in my beloved VR6, but once they heard the bi-turbos it was more like "VR... what?".